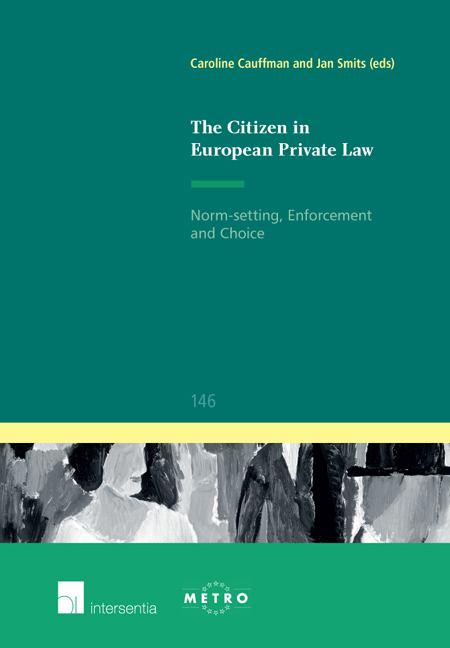 The Citizen in European Private Law
Norm-Setting, Enforcement and Choice
Buy print or eBook[Opens in a new window]

It is not a particularly surprising revelation that the citizens of the European Union are often not aware of the rights that they have, nor of the possibilities to enforce these rights. This was a reason for the European Commission to declare 2013 the ‘European Year of Citizens.’ The explicit aim of both the Commission and the European Parliament was – twenty years after the establishment of European Union citizenship under the Maastricht Treaty – to boost the idea of EU citizenship and to develop strategies to better inform European citizens about their rights. It was in this context that the Faculty of Law of Maastricht University decided to initiate a number of events around this ‘Year of Citizens.’ One of these events was devoted to the role of private actors (meaning: citizens, consumers and companies) in normsetting, enforcement and choice of law. It took the form of a conference entitled ‘The Citizen in European Private Law’, organised on 18 October 2013 in cooperation between the Maastricht European Private Law Institute (MEPLI) and the Maastricht Institute for Corporate Law, Governance and Innovation Policies (ICGI). Caroline Cauffman, Mieke Olaerts and Jan Smits were able to take care of the practical organisation thanks to the highly proficient help of Marina Jodogne and Marjo Mullers. Damla Cavusoglu and Lotte Meurkens wrote an elaborate report on the conference that was published in the European Review of Private Law 22 (2014), p. 469-480.

This volume contains most of the contributions that were presented at the conference, together with some new articles. Its structure reflects the wish of the editors to look at citizen empowerment from a thematic perspective and not from the viewpoint of separate fields of law. Thus, part I looks at choice and regulatory competition in both company law and family law, while part II considers norm setting and enforcement in consumer law, commercial law and family law. The introduction to this volume explains the set-up in more detail.

We would like to thank Marina Jodogne, Eve Meurgey, Alina Anapyanova and Christopher Mondschein for essential help in preparing this volume. We also acknowledge the financial support received from the University Fund Limburg/SWOL and from the Faculty of Law of Maastricht University to organise the conference.