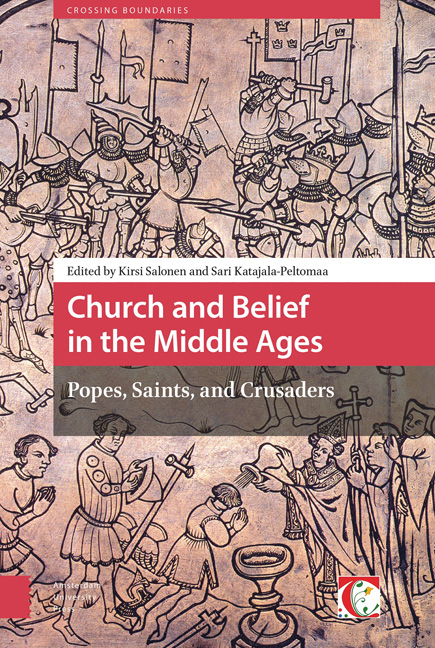 Church and Belief in the Middle Ages
Popes, Saints, and Crusaders
Buy print or eBook[Opens in a new window]

For hundreds of years at the beginning of the Christian era, it was possible for pilgrims from Europe to undertake visits to the Holy Sepulchre in Jerusalem. The expressions ‘peregrinus’ and ‘peregrinatio’, as Christian Krötzl has pointed out, have roots in the pre-Christian period and they underwent a strong change of meaning during the Middle Ages. With the expansion of the Islamic world in the eastern part of the Mediterranean, the travels and journeys of the pilgrims became more and more difficult and dangerous. Thus the pilgrims started to carry weapons or were protected by military units so that they could safely reach Jerusalem and travel back again. At the end of the eleventh century, the possibilities of travel to the Holy Land were strongly reduced as a result of the Arab conquests and soon in reality terminated. For this reason, Pope Urban II gave his famous speech at the Council of Clermont in November 1095 demanding the liberation of the Holy Sepulchre in Jerusalem. The speech was welcomed with great enthusiasm (Deus lo vult, ‘God wills it’); numerous French and German princes and noblemen in particular were inspired for a crusade and started to prepare themselves. After several difficulties and internal rivalry among the crusaders, Jerusalem was liberated in July 1099 and the Kingdom of Jerusalem was founded. The European crusade movement towards the Holy Land lasted until the second half of the thirteenth century, leaving many traces in the written sources.

After some decades, the concept of crusades, which started as campaigns against non-Christianized people in the Holy Land, spread also outside the territory of Palestine. In the Kingdom of Portugal against the Moors and in the Baltic Region against Slavs and Balts, crusades and military operations were realized with the consent and understanding of Rome. Some Scandinavians visited the Holy Sepulchre and, like the Norwegian King Sigurd Jorsalfar (d. 1130), fought in the Holy Land (1107-1111). According to written sources, Jerusalem was the most visited long-distance destination among Scandinavian pilgrims in the thirteenth century, although the number of sources are scarce and do not allow a reconstruction of the actual number of pilgrims from northern Europe.