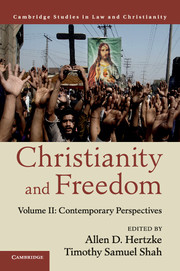 Introduction: Christianity and Freedom in the Contemporary World

The seizure of Mosul, Iraq's second largest city, by Islamic State militants in the summer of 2014 stunned the world. Especially shocking was their brutal efficiency in killing or expelling the entire, and ancient, Christian population from the city. But for those following developments in the region over the past decade this was, sad to say, less of a shock. Since the fall of the Saddam Hussein regime in Iraq, Western advocates such as Nina Shea and local leaders including Chaldean Patriarch Louis Raphaël I Sako of Baghdad have sounded the alarm about the catastrophic assault on Christian minorities, which accelerated with the civil war in Syria and the rise of ISIS. But what has also become evident is that the fate of other vulnerable religious minorities, not to mention the pluralist fabric of these societies, rides on the fate of Christians. Thus the scenario playing out in the Middle East underscores the importance of assessing the role and fate of Christian communities around the globe.

As the historical volume demonstrates, Christianity, with all of its human frailties, nonetheless carries in its DNA a transcendent conception of human dignity and equality conducive to free institutions and societies. Because the experiences of Christian minorities today mirror those that spawned earlier churches’ historic innovations, the contemporary situation offers an unprecedented opportunity – a kind of vast global laboratory – to probe how diverse Christian communities are replicating the historical findings of Volume 1 of this project.

But how do Christian communities under various forms of pressure or hardship instantiate the faith's transcendent vision? In what ways, or where, are they advancing freedom, building civil society, or providing economic uplift in diverse societies around the world? What are the causes and dimensions of the persecution they face and how are they responding to that pressure? What resources – theological, social, or transnational – do they marshal in leavening their societies? And what will be lost if the Christian presence is marginalized or, in the case of parts of the Middle East, vanishes?

These questions are of enormous relevance to understanding contemporary religious persecution and to devising adequate policy responses to it. To answer them the Christianity and Freedom Project commissioned original field research guided by common questions, along with global demographic overviews, thematic investigations, and surveys by leading scholars, to understand how Christian minorities and transnational institutions contribute to societies across the globe.