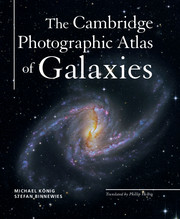 Most galaxies are not isolated in space, but rather form groups. Galaxy clusters are the largest structures visible in wide-angle images of the universe. These galactic groups are challenging subjects for astrophotographers.

THE CLASSIFICATION AND MORPHOLOGY OF GALAXY GROUPS AND GALAXY CLUSTERS

Independent of the focal length, when studying images of galaxies one notes that galaxies are not solitary objects. This does not necessarily imply spatial proximity, since even if the angular distance of two suspected neighbours is small, their true separation can be much larger. Since the third dimension, the distance of the individual galaxies from the Milky Way, is not obvious from the photograph, there is room for speculation. It is thus a logical assumption that galaxies which appear about the same size and display a similar amount of detail are located at similar distances and are thus neighbours in space. However, sizes are just a rough estimate since the appearances and thus relative sizes of galaxies in a group can be greatly changed by interactions. Redshift - derived galaxy distances in astronomical databases, by contrast, allow firmer statements to be made concerning which galaxies have a high probability of being part of a pair or group. Collections of up to 50 galaxies are deemed to be a group if the diameter is in the range three to five million light years. Due to the common gravitational potential, the members of the group differ only slightly in redshift. The so-called virial theorem implies that the mass of a bound group is always less than 2–3 × 1013 solar masses. The Milky Way is itself part of such a group – the Local Group. It consists of about 35 galaxies, although the number is increasing as further members have been discovered in the last few years. These new members are usually dwarf galaxies in the surroundings of large group members. Apart from the Milky Way, M 31 and M 33 are the largest and brightest members of the Local Group. Looking beyond the Local Group, nearby galaxies in our Galactic neighbourhood are also arranged in groups.