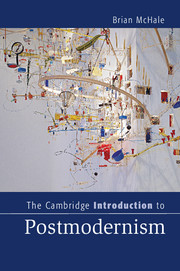 Another big bang: on July 15, 1972, at 3:32 p.m. (according to Charles Jencks), several high-rise blocks of the Pruitt-Igoe public housing project in St. Louis, Missouri, were demolished, signaling (not for the first or last time) the failure of International Style modernist architecture to deliver what it promised – safe, healthful, inexpensive, and above all rational housing for the masses. Waiting in the wings to supplant modernism was a new mode of architecture, one hospitable to such unmodernist qualities as popular appeal, historical allusion, legible symbolism, and pleasure: postmodernism. The outlines of this new mode could be glimpsed in a book of that same year, the manifesto Learning from Las Vegas by the architects Robert Venturi, Denise Scott Brown, and Steven Izenour.

That, at least, is Charles Jencks's story about the (literal) implosion of modernist architecture and the timely rise of postmodernism. It is a compelling one, especially in light of the fact that Pruitt-Igoe's prize-winning architect, Minoru Yamasaki, also designed New York's World Trade Center, the North Tower of which opened in December 1972; the dedication of the entire complex would follow the next year. Buildings whose destruction almost thirty years apart frames the postmodern era, both designed by the same architect – the coincidence is uncanny (Paperny, 2010; Williams, 2011, 94).

As compelling as it is, Jencks's story is perhaps too good to be entirely true. For one thing, as Jencks admitted all along, the failure of Pruitt-Igoe is only one of a multitude of symptoms of modernist architecture's exhaustion in the late sixties and seventies, if a strikingly iconic one. Moreover, the specific time of Pruitt-Igoe's destruction – 3:32 p.m. – which contributes so much to the story's air of circumstantial precision, turns out to have been fabricated (Jencks, 2011, 27). In any case, the demolition of the complex, though begun on that day in 1972, actually continued into the next year, 1973 (Killen, 2006, 211).