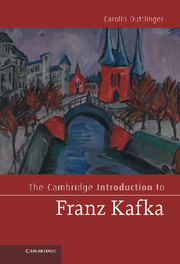 Although Kafka started writing in the middle of the 1890s, he later destroyed many of the stories, diaries and letters he had written before 1912. Only a handful of these earliest texts have survived; the most substantial are the prose narratives ‘Description of a Struggle’ and ‘Wedding Preparations in the Country’ – both of them unpublished during Kafka’s lifetime – and his first book, a collection of short prose texts called Meditation (1912). These early texts have received much less attention than his later works, for critics have often argued that they are not representative of Kafka’s ‘mature’ style. However, these early texts deserve our attention for two reasons. First, they show a less familiar Kafka, an author who experiments more freely with different narrative techniques and whose texts reflect the influence of avant-garde movements such as Decadence, Impressionism and Expressionism, but also of the ‘new’ medium of film. Second, although these early texts may strike us as quite different from Kafka’s more famous works, they contain many of the themes and stylistic features which also define Kafka’s later texts; in fact, there is a strong sense of continuity from his earliest works all the way through to his last.

‘Description of a Struggle’

‘Description of a Struggle’ (‘Beschreibung eines Kampfes’), on which Kafka worked intermittently between 1904 and 1910, is a complex, multi-layered text which skilfully interweaves different narrative strands and perspectives. At a party, the nameless first-person narrator meets an acquaintance, who tells him about his sweetheart. They leave together and wander through the nocturnal city. In the middle section, the plot takes a turn towards the surreal. The narrator leaps on to his acquaintance’s shoulders, riding him like a horse, and gets him to take him out of the city and into a forest.