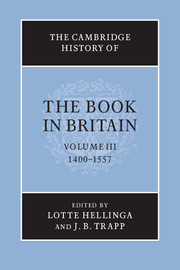 from III - THE LAY READER

By
Pamela Neville-Sington
Edited by
Lotte Hellinga  and
J. B. Trapp
Book contents
Get access

Politics and organized religion are each branches of the persuasive arts. With the invention of the press, the printed word was immediately seized upon by the Church as the most rapid and effective means of disseminating doctrine and seeking support as well as money. Thus, the first dateable productions from the presses of both Gutenberg in Mainz (1454/5) and Caxton in Westminster (1475/6) were indulgences to raise money for that project dearest to the heart of the papacy, a crusade against the Infidel. Once Caxton had introduced the printing press into England, the highly centralized nature of government meant that the Crown too could be quick to exploit the printed word in order to legitimize the reign, glorify the monarch, justify policy and promulgate the law.

Received opinion associates this exploitation of the press with the Reformation, and in England with Thomas Cromwell in particular, as Henry VIII’s agent. There is no doubt that its use by both sides in the Reformation controversy was intensified in the late 1520s and 1530s. It is equally true, however, that English rulers had been using the printed word as a means of persuasion since the reign of Edward IV. An important development came with Henry VII’s creation of the office of King’s Printer; Henry VIII and his Chancellor, Cardinal Wolsey, turned this post into an efficient government tool. Two ingredients only were needed for an effective printed propaganda campaign: a cause and an imaginative campaign strategist. The Reformation provided one and Cromwell the other.