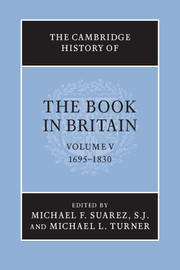 from III - SPECIALIST BOOKS AND MARKETS

Of all the new markets for print that emerged between 1695 and 1833, the one for young readers was arguably among the most important to Great Britain’s polite,commercial society. Recent scholarship on such topics as the constructs of the family, motherhood and childhood, the rise of consumerism, the expansion of educational provision, theories of the mind, cognition, developmental psychology and the emergence of child-centred pedagogies during the early modern era suggests that the expanding market for children’s books was shaped by a complex nexus of familial aspirations, commercial interests, social programmes and intellectual rationales. Although an ambitious synthesis is beyond its scope, this chapter will show that during this period the proliferation of printed materials for children cannot be understood without analysing their production and reception.

In order to map the growing market’s contours, the term‘children’s book’ is used here to mean all genres in the vernacular produced for youngsters. This sense contrasts with F.J. Harvey Darton’s use of the term as a synonym for children’s literature in his standard history. His thesis, which viewed the genre’s rise as a battle between instruction and amusement in which the latter ultimately triumphed, maintained a sharp distinction between literary and educational texts that seems less helpful here. Instead, an acknowledgement that the line between fiction and non-fiction was relatively fluid between 1695 and 1833 makes it possible to describe the growing market as a reflection of contemporary concerns rather than of our own. It is important to keep in mind that few people then envisioned such a radical change as the evolution of a separate literature for children, nor would they have thought it necessary or desirable.