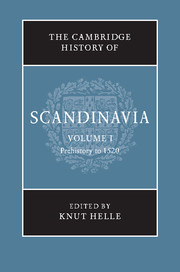 2 - The Stone and Bronze Ages

from PART I - THE GEOGRAPHY AND PREHISTORY OF SCANDINAVIA

The first inhabitants of Scandinavia migrated from the south, south-east and east following the retreating continental ice margin. In southern Scandinavia – i.e. present-day Denmark, southern Sweden and southern Norway – the late Palaeolithic hunters of the northern continental plains extended their hunting trips northwards in pursuit of the reindeer herds. On the Baltic plains, east of the Baltic Ice Lake, the vanguard settlement came from the south, from the eastern territories of the central European reindeer hunters. On the emerging southern Finnish coasts and in the Karelian zone these hunters met with people advancing from the south-east and east. In the north there was probably migration eastwards through the Arctic zone, although there is no clear archaeological evidence for this.

In Denmark and on the southern coasts of the Scandinavian peninsula the reindeer hunters belonged, archaeologically, to the so-called Hamburg, Ahrensburg and Federmesser cultures, which were already well established in the northern European lowlands. The most typical material manifestation of these cultures is the tanged point made of a long flint blade. Characteristic of the early Hamburg culture is also the so-called ‘Zinken’ artefact, a blade with a peculiar curved peak on one or both ends which was obviously used to produce points and harpoons from the long bones of reindeer. The northernmost finds of these tools derive from a complex of sites in the Finjasjö area in Skåne which demonstrate the northern limit of the Hamburg reindeer hunters’ trips about 14,000 years ago. During a warm spell in about 9000 BC (Allerød) within the generally still cold Late Glacial Period (Dryas) (see Chapter 1), elk were roaming the open forests of southern Scandinavia and were hunted, together with reindeer, by the people whose culture has been named after the finds at Bromme in Skåne; this was a northern extension of the Hamburg culture.