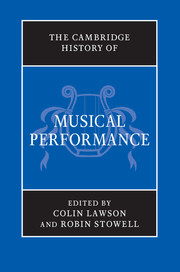 Evidence in musicology may be described, as in jurisprudence, as information discovered or provided in an investigation to establish conclusively the truth about something in question. It offers the vital raw materials for the progress of research in numerous musicological sub-disciplines, and it is especially important in performance for those who wish to recover knowledge and attempt to recreate a former sound world – and mostly without the benefit of any aural legacy from the period concerned. Such evidence takes a rich variety of forms, as illustrated by a memorial volume to Thurston Dart in which each contributor uses a particular type of source-study, creating a veritable ‘case-book of musical research’. Such diversity is also demonstrated in the present volume, especially in those chapters in Parts II–VII inclusive.

Most performers utilise the evidence of source materials to forge so-called ‘historically informed performances’, implementing technique, styles and tastes appropriate to the music and attempting to establish features of it that conventional notation does not detail – these may comprise anything from musica ficta provision to the determination of, amongst other issues, instrumentation, pitch levels, tuning, rhythmic considerations, specific and extempore ornamentation, articulation, accentuation, dynamic nuances and, in Baroque music, the realisation of continuo accompaniments. Authoritative interpretation of the evidence for this variety of performance issues requires detailed historical study, and the potential exists for a diversity of interpretations of the information acquired, as well as for more than one acceptable solution. And, of course, all the evidence in the world will never guarantee performances that are convincing and vivid.