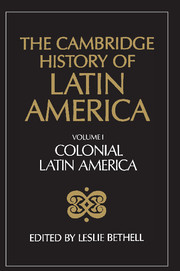 from PART ONE - AMERICA ON THE EVE OF THE CONQUEST

At the end of the fifteenth century A.D. the lands surrounding the Caribbean Sea were densely populated with people who were frequently organized into rank societies or chiefdoms of varying degrees of complexity. Among these polities two major spheres of political interaction can be delineated. The centre of one was the northern half of Colombia, with lower Central America (Panama and Costa Rica) and northern Venezuela as regional extensions to west and east, respectively. The centre of the other was the islands of Hispaniola and Puerto Rico in the Greater Antilles including Jamaica and Cuba. Geographically intermediate between these areas of higher political development, and in some ways linking them culturally, were the peoples of the Lesser Antilles, north-eastern Venezuela and the Venezuelan llanos (plains) north and west of the Orinoco river whose organization was less complex. On the periphery of the circum-Caribbean territories, that is, in eastern Nicaragua and Honduras, the Orinoco delta, and small portions of Cuba and Hispaniola, a few societies continued to exist at a still lower, tribal, level of cultural development.

Circum-Caribbean rank societies were composed of two social sectors of elites and commoners, hierarchically related. Hereditary membership in one or the other sector, together with additional distinctions in social status recognized particularly among members of the elite, conferred differential rights, obligations, and privileges on individuals and groups. For example, persons of high rank controlled select aspects of the production, distribution and consumption of resources. They supervised social relations within their group by periodic public admonishments and by authorizing sanctions for serious wrongdoing. They led squadrons of warriors into battle against external opponents.