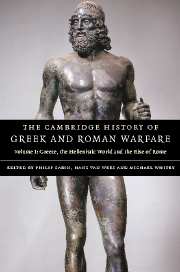 8 - Warfare and the state

from Part I - Archaic and Classical Greece

‘States make war and war makes states.’ Charles Tilly’s dictum represents a view widely shared by political scientists, sociologists and anthropologists. ‘State’ and ‘war’ are not self-explanatory or uncomplicated concepts. Max Weber’s immensely influential definition posited that the state encapsulated a human community, a definite territory and a monopoly of legitimate physical force (Gewaltsamkeit). That force is usually understood to have two functions: an internal one, consisting of the enforcement of legal order by a police force; and an external one, consisting of the defence of the state’s territorial sovereignty by the army and navy. Guided largely by this thinking, several scholars classify ancient Greek communities, particularly the polis, as stateless societies: legal order was not ensured by a police force but through the custom of self-help practised by the community members themselves, and with rare exceptions there were no standing armies. In short, in most places legitimate violence had not yet become the monopoly of a central political authority.

Recently, however, Mogens Hansen has pointed out that Weber’s criterion of a monopoly of legitimate violence was not met even by major European states in the seventeenth and eighteenth centuries; while it was often posited as an ideal, this monopoly seems never to have been realized in full. Such a partial emancipation from Weberian influence is a great leap forward. The present chapter argues that the concept of state is perfectly compatible also with polities in which legitimate force exists within an oligopolistic rather than a monopolistic system.