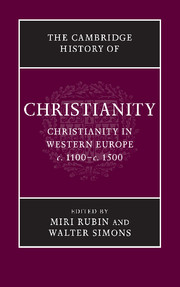 from PART VI - THE CHALLENGES TO A CHRISTIAN SOCIETY

It was, the annalist of the city Worms tells us, the year of Our Lord 1231:

There came by divine permission a miserable plague and most harsh sentence. For indeed there came a certain friar called Conrad Dors, and he was completely illiterate and of the Order of Preachers, and he brought with him a certain secular man named John who was one-eyed and maimed, and in truth utterly vile. These two, beginning…firstly among the poor, said that they knew who were heretics; and they began to burn them, those who confessed their guilt and refused to leave their sect… And they condemned many who, in the hour of their death, called out with all their heart to our Lord Jesus Christ, and even in the fire strongly cried out, begging for the help of the holy Mother of God and all the saints.

Conrad Dors and John were then joined by Conrad of Marburg, a priest who had been the famously harsh confessor of St Elisabeth of Hungary (1217–31) until her recent death. Led now by this second Conrad, and backed by papal authority, the trio continued their work:

In truth, those who confessed to heresy, as many innocent people did to stay alive, had the hair shaved from their heads above the ears, and they had to go around like this for as long as it pleased [the inquisitors]. Those who, in truth, refused [to confess] were burnt. And their will prevailed everywhere, because brother Conrad was a literate man and especially eloquent.