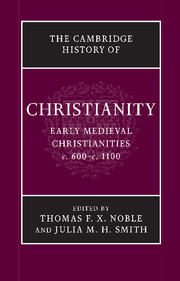 On the cusp of the twelfth century: Latin Christendom and the kingdoms of the christened

In January 1076, as the confrontation between German king and Roman pope spun out of control, King Henry IV, together with most of the assembled German bishops, called upon Hildebrand (“no pope but false monk”) to step down. Word of this action reached Rome about the time its Lenten synod (February 14–20) went into session. Pope Gregory resolved to depose and excommunicate the king, in that order, but he first delivered a lengthy sermon, at least as Paul of Bernried told it fifty years later (1128). The “precursor to Antichrist” had arisen in the church, Gregory announced, and the assembled churchmen were entering upon a new age:

It’s enough that we have lived up until now in the peace of the church. Now, indeed, the harvest, long dried-out, should again be watered, fittingly, with the blood of the saints, so that Christ’s fruit, weakened over length of years by old age, might return, moistened afresh, to its original beauty. We shall see the devil’s war … break out in open field. Now is the time for Christ’s recruits to fight back.

The words,whether or not they retain an echo of Gregory’s sermon, are Paul’s,their combative tone informed by the beleaguered situation of the Gregorian party around Regensburg. But they captured sentiments that drove Gregory and his partisans. In January 1075 Pope Gregory had called upon Duke Rudolf of Swabia and Duke Bertolf of Carinthia openly to resist simoniac office holders and unchaste clerics in the face of recalcitrant bishops.