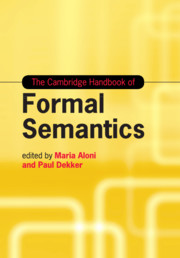 Humans characteristically use language, and a characteristic feature of the use of language is that it is meaningful. Semantics is the study of meaning, of the structural ways in which it is realized in natural language, and of the formal logical properties of these structures. The area of formal semantics finds its roots in logic and the philosophy of language and mind, but it has also become deeply entrenched in linguistics and the cognitive sciences.

This Cambridge Handbook of Formal Semantics constitutes a comprehensive guide to contemporary formal semantics, and it provides, among other things, a historical context and foundation of the field, a survey of the variety of formal/logical approaches to linguistic meaning, an overview of the major areas of research within current semantic theory, and a presentation of the interfaces between semantics and other domains of linguistic inquiry, broadly conceived.

This handbook is intended for everyone interested in the understanding of meaning. It presents a broad view of the semantics and logic of natural language and, as a helpful tool, of the logical languages employed.

The twenty-five chapters constituting this handbook have been grouped together into five major parts, and we hope the handbook can thus be seen to cover, in a systematic and transparent way, both the broad and the varied scope of the domain as well as the width and variety of the perspectives adopted. The contributions are subsumed under the following headings:

The first and the last parts aremore of a methodological or programmatic nature. The first part gives a general sketch of the frameworks in and perspectives from which semantic research is conducted. The last part focuses on the intimate and intrinsic relationships with bordering academic disciplines. The three middle parts are concerned with more or less established major domains of linguistic research: the nominal domain (Part II) and the verbal or predicative domain (Part III). Both domains are studied with logical and (natural language) ontological interests. Part IV gives an overview of the various moods and modalities in language, ranging from negation, to modals, questions and other moods.