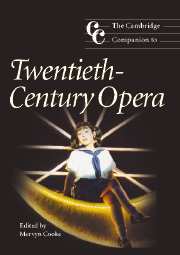 [Winter, 1914:] The coal merchant had a pretty wife who was also an excellent musician, and she gave [Debussy] some [coal] in return for an inscription on her copy of Pelleés . . .

The idea that so aesthetically rarefied a work as Pelléas might have been the occasion of a request (in wartime, too) for a quick autograph from Debussy by a local tradesman's wife with a passionate interest in music reminds us just how widely known and well loved the opera had become in France after the polemics of the work's initial reception had died down. It further helps us to understand why nearly 30 years later, after a fairly dismal decade for the opera during the 1930s, the wartime performances given in 1942 at the Opéra-Comique under Roger Désormière were to be such an important manifestation of national identity and ‘cultural resistance’ during the Nazi Occupation, and also how they managed to exert such a powerful fascination at the collective psychological level, as well as bringing about a certain reinvigoration of the work itself as a musical and dramatic entity (Nichols and Langham Smith 1989, 156–9).

This in turn provides a context – to an extent backward looking and more than a little nostalgic, yet honest and deeply felt – for the renewed passion with which the piece now came to be viewed, both in itself and as an embodiment of French taste and identity; and also for the sense of shock that greeted the groundbreaking, in every sense iconoclastic postwar production by Valentine Hugo, also given at the ‘temple’ of the Opéra-Comique, in 1947.