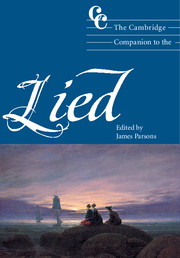 10 - Tradition and innovation: the Lieder of Hugo Wolf

from Part III - The nineteenth century: issues of style and development

By the time that the fiery, fifteen-year-old Wolf (1860–1903) from the town of Windischgraz in what was then Lower Styria (now Slovenjgradec in Slovenia) arrived in Vienna in 1875 to study at the Conservatory, the Lied had a rich history and an immense repertory, with more songs rolling off the presses each year. The question of how to compose Lieder in an original manner – and originality was a constant desideratum of late Romanticism – when so much German lyric poetry had been colonized many times over was complicated in this instance by a young composer's Wagner-mania. Comparing his predicament to that of a seedling tree trying to grow in the shadow of a mighty oak, the young Wolf struggled to assimilate the music of Schumann and Schubert, Wagner and Liszt, in the formation of “Wölfer's own howl,” as he dubbed his unique compositional voice.

The successful outcome of those struggles was a Lied aesthetic whose true originality we are only beginning to appreciate. In his brief compositional maturity, Wolf made complicated use of Lied traditions in order to forge a style in which late Romanticism's extensions of tonality were applied to nuanced, multivalent interpretations of older poetry. Not for him the poetic avant-garde: there is a revealing anecdote about Wolf reading rhapsodic effusions hot off the press and hopping up and down in rage at the pretentiousness of the poems. Instead, he gravitated to earlier generations of nineteenth-century poets, including three of the century's greatest masters of German lyric poetry: Goethe, Eichendorff, Mörike. Wolf once stated defiantly – he was challenging Schubert with this assertion – that certain poems had to await the creation of a post-Wagnerian tonal language before they could find full realization in music