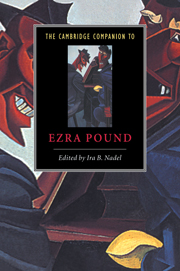 By
Ian F. A. Bell
Edited by
Ira B. Nadel
Show author details

“ad interim 1933” is the promisory note concluding Eleven New Cantos of 1934 in a Canto which offers Mussolini and the shade of Jefferson as potential ameliorators within the crisis of belligerency and money that for Pound constituted contemporary Europe. It is the function of the two following volumes, The Fifth Decad of Cantos (1937) and Cantos LIILXXI (1940), to meet that promise through a negotiation of a cultural map constructed in the main by the founding of a bank, the Monte dei Paschi, in sixteenth-century Siena, the reforms instigated in Tuscany during the eighteenth century by the Grand Duke Pietro Leopoldo and his son Ferdinando (in JFDC), the history of China (based largely on Confucian principles) through to the eighteenth century, and the career of John Adams (in CL). These are the presiding issues in a pair of volumes which offer a diagnosis of the corruption of Western culture by usury and seek to discover alternatives through resurrecting pre-capitalist systems of exchange, the values of Confucian thought, and the ideals of the early American Republic.

While Cantos LII-LXXI uses a simple bipartite structure (where the first half, Cantos LII-LXI, is devoted to China and the second half, Cantos LXII-LXXI, to Adams), The Fifth Decad is more various in its preoccupations. It begins with the Monte dei Paschi in Cantos XLII and XLIII where the bank is figured as an image of fiscal solidity and certainty based upon its deployment not of the abstract and speculatory structure of capitalist finance but of the produce from the immediate region (see SPR, 240).