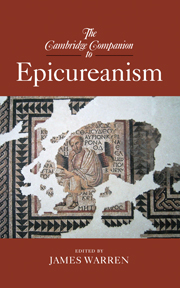 12 - Philosophia and technē: Epicureans on the arts

A widely publicized trait of ancient Epicureanism was its opposition to paideia, the set of disciplines or subjects of instruction which instilled culture and bestowed prestige on the Greek elite and included the so-called 'liberal' arts, usually: grammar or literature, rhetoric, dialectic, geometry, arithmetic, astronomy, music. Epicurus was said to have turned to philosophy when he could not learn from his grammar teacher about 'Chaos', at the beginning of Hesiod's theogony (DL 10.2). Later, he wrote to his pupil Pythocles to 'Hoist the sails of your skiff and avoid all of paideia' (DL 10.6=163 Us.; cf. Plutarch, Non posse 1094D), and to another pupil he said: 'I call you blessed, Apelles, because you have set out for philosophy undefiled by any paideia' (Athenaeus Deipn. 13.588a=117 Us.). Epicurus' attitude to the arts is conditioned by the privileged position he accords philosophy: you should do philosophy all your life because it is never untimely to care for the health of your soul (Ep. Men. 122). Other disciplines do not meet this high standard of necessity and are criticized for it. Sextus Empiricus notes that two groups attacked the arts: the Epicureans did so because the arts 'contributed nothing to the perfection of wisdom' (or else in order to cover up Epicurus' ignorance in such things), while the Pyrrhonians avoided a dogmatic attack of this sort (and did not suffer from the ignorance of an Epicurus), but found the same sort of controversy and puzzles in the arts as they did in philosophy too (M 1.1 and 1.5).