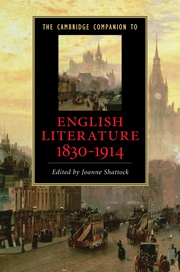 The Cambridge Companion to English Literature, 1830–1914
Buy print or eBook[Opens in a new window]

4 - The culture of criticism

Perhaps there is no single feature of the English literary history of the nineteenth century, not even the enormous popularisation and multiplication of the novel, which is so distinctive and characteristic as the development in it of periodical literature … Very large numbers of the best as well as of the worst novels themselves have originally appeared in periodicals; not a very small proportion of the most noteworthy nineteenth-century poetry has had the same origin; it may also be said that all the best work in essay, whether critical, meditative or miscellaneous, has thus been ushered into the world … and though there is still a certain conventional decency in apologising for reprints from periodicals, it is quite certain that, had such reprints not taken place, more than half the most valuable books of the age in some departments, and a considerable minority of the most valuable in others, would never have appeared as books at all.

This passage from George Saintsbury’s 1896 History of Nineteenth-Century Literature highlights one of the most remarkable publishing phenomena of the period 1830-1914, the proliferation and predominance of the periodical press. As he notes, many novels were first published in magazines and then issued in volume format. Individual poems first appeared in reviews and magazines. Many influential prose works were published serially, along with scholarly work in emerging academic disciplines.

Saintsbury was well qualified to comment. Until his recent appointment to the Regius Chair of English at the University of Edinburgh in 1895 he had spent nearly a quarter of a century as a journalist, writing and reviewing with frenetic energy for Macmillan’s Magazine, and the Fortnightly, the Academy and the Saturday reviews among others, covering contemporary English and French literature as well as current politics. He once claimed he could earn on average £3 10s for an evening’s reading and a morning’s writing.