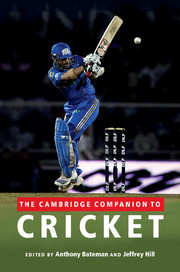 15 - Cricket and representations of beauty: Newlands Cricket Ground and the roots of apartheid in South African cricket

In January 2010, England played South Africa in the traditional New Year's Test at Newlands in Cape Town. Former England captain Michael Atherton led his story in the London Sunday Times with an ode to the beauty of the stadium:

A new year of Test cricket dawns for England at one of the most stunning venues in the world game. Newlands was shimmering on Friday morning under the shadow of Table Mountain, Cape Town's defining feature, as both sets of players prepared for the pivotal Test of the series.

England captain Andrew Strauss was equally respectful of the venue and throughout the match the media framed the ground as ‘picture perfect’. The Times from Johannesburg, its front page dominated by a colour photograph of Newlands, dubbed it the ‘Field of Dreams’.

Even the Canon Chancellor of Blackburn Cathedral, Chris Chivers, joined in the reification of this space. In a thoughtful article in the Cape Times, he mused on how epic battles on the sports field mirror the real-life struggles against fear, failure and pain that every individual is engaged in. Newlands was his starting point: ‘nothing beats a Test match played at Newlands, beneath one of the most spectacular mountains in the world.’ Furthermore, watching a game here provides a perfect setting for understanding deeper things about life, for ‘aesthetics – as the Ancient Greeks knew only too well – sets the stage for contests which are often of the most epic proportion’.