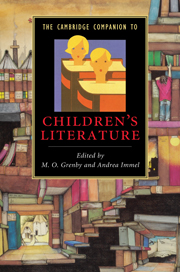 3 - The making of children’s books

from Part I - Contexts and Genres

One of the most famous and widely facsimiled letters ever written is that directed to Noel Moore from Eastwood, Dunkeld, on 4 September 1893. In it the sender, who signs herself 'Yours affectionately, Beatrix Potter', writes and illustrates a story about a disobedient rabbit. Several years later, Miss Potter - who had been having some success in selling designs for greeting cards - conceived the idea of converting the story into a book. She borrowed the letter from Noel and worked it up, with more drawings, into a tale of publishable length and despatched it unavailingly to a sequence of at least six publishers.

Having faith in her work (and a little money put by), she determined that, if the trade were not interested, she would publish it herself and so, for Christmas 1901, she had ready for distribution 250 copies of The Tale of Peter Rabbit, eighty-six pages, illustrated with electrotypes of her original line drawings, plus a colour-printed frontispiece, the whole bound in pale green paper over boards. Within a month the success of the venture was such that she had another 250 copies run off, while, at the same time, the publishers Frederick Warne began negotiations for an edition that would enter the mainstream book trade. They besought the author to convert her line drawings into watercolours (which would, like her earlier frontispiece, be among the earliest book illustrations to be printed by the new 'three colour process') and, with a prudence common to many in the business, they agreed only a modest royalty for this new and unknown author, but with provision for an increase should success attend the project (fig. 3).