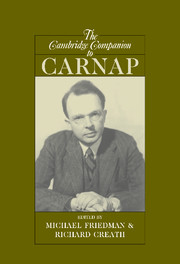 There are two routes by which Rudolf Carnap arrived at his mature philosophy and the central concept of analyticity within it. Both have the same starting point, Kant's conception of the a priori. But the paths themselves were different. One progressed from Kant's theory of space through the development of non-Euclidian geometries, the methodological and metamathematical researches into geometry of Poincare and Hilbert, and Einstein's theory of relativity on to Carnap's own reworking of his philosophy of empirical science in the light of these developments. The other path, which will be emphasized here, traces the history of logic, or perhaps more precisely the history of the philosophy of logic. Even that story is too long to recount here, so I will confine myself to its last step, the point in the 1930s when the basic features of Carnap's philosophy crystallized.

Carnap’s mature philosophy was prompted most immediately by his recognition that there are alternative logical systems. That is, there is more than one body of doctrine that purports to give the general structure of legitimate deductive reasoning, and these alternatives cannot be translated into one common system in any satisfactory way. Carnap’s response in the mid-1930s was to develop a broad philosophic view according to which what we take to be logical truths (and the rest of those commitments traditionally thought to be a priori) do not describe the world in substantive ways but rather jointly constitute or structure the language used to describe that world. There are many such languages, and the choice among them is a question of convenience rather than correctness.