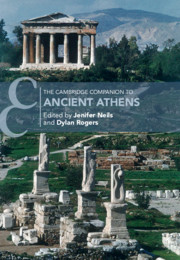 Part I - The Urban Fabric

For a good overview of Early Iron Age Athens (Submycenean to Archaic), consult Dimitriadou 2019. For the Mycenean Akropolis, see Iakovidis 2006 (with more recent bibliography in Papadopoulos and Smithson 2017). For the topography of Early Iron Age Athens, see Papadopoulos 2003 (with references to critical earlier work); for the cemeteries of the period in the Kerameikos and Agora, see Morris 1987, Knigge 1988, Papadopoulos and Smithson 2017 (with discussion of resilience theory), and Papadopoulos forthcoming. For the collapse of the Mycenean economy and what follows, Murray 2017 is the most recent; for central Greek settlement and demographics, Knodell forthcoming is invaluable. For periodization in the Early Iron Age, Kotsonas 2016 is important; critical developments of the period are fully discussed in Papadopoulos 2014. Among earlier studies, the overviews by Snodgrass 1971 (cf. also his collected papers, Snodgrass 2006) and Coldstream 1977 remain important.

A web-mapping platform with all published archaeological remains revealed in rescue excavations in Athens from the nineteenth century onwards will be launched in 2020 by the Dipylon Society for the Study of Ancient Topography (https://dipylon.org). Costaki 2006 and 2009 offers a comprehensive study of Athenian streets, discussing technical matters and urban planning issues. Information on stretches of the city walls and the streets excavated in rescue excavations can be found in the reports of the Archaeological Service published annually in the Archaiologikon Deltion (in Greek).

For fortifications in Athens, Theocharaki 2020 provides the definitive study of the city walls throughout the centuries, assembling literary sources and archaeological evidence. The study of the fortifications in the Kerameikos has been recently enriched by the final publications of the Dipylon and Sacred Gates (Gruben and Müller 2018 and Kuhn 2017, respectively). Conwell’s 2008 monograph throws new light on the Long Walls, arguing that they were effective whenever the Athenians were confident in the safety of their fleet. Judeich 1931 and Travlos 1960 and 1971 provide the best overview of the location and names of the city gates and a general discussion of the city streets.

The bibliography on the Akropolis of Athens is vast and thus very difficult to study fully. That said, the books by Hurwit 1999 and 2004 and Holtzmann 2003 continue to be essential and irreplaceable. For this reason, the selected bibliography presented here is mostly from 2004 onwards; for a general bibliography on the Athenian Akropolis, see Sassu 2012. The most important recent books taking general approaches and making many new contributions are those by Neils 2005, Barringer and Hurwit 2005, Shear 2016, Meyer 2017, and Rous 2019, along with the article of Valavanis in Neils and Palagia forthcoming. Greco 2010 provides a summary of research data and a good bibliography on all the monuments, while the latest collections on the Hellenistic and Roman periods is Krumeich and Witschel 2010. The investigations and papers by scholars of the restoration of the Akropolis monuments continue to provide new material (e.g. Lambrinou 2019 and Manidaki 2019), as well as the honorary volumes for Manolis Korres (Zambas et al. 2016) and Charalambos Bouras (Korres et al. 2018), along with Palagia and Sioumpara 2019 and Neils and Palagia forthcoming.

The excavations of the Athenian Agora have been well published. Over sixty volumes and 450 articles have appeared thus far, and more are in preparation. The majority of articles are published in Hesperia, the journal of the American School of Classical Studies at Athens. The website of the Athenian Agora Excavations (www.agathe.gr) provides online access to numerous resources, including archival excavation materials, plans, and full publication lists of the excavations. On the early years of these excavations see Dumont 2020. For more on the ancient sources related to the Agora, see Pausanias (Book 1, especially chapters 3–18), Aristotle’s Constitution of the Athenians (Athenaion Politeia), and Wycherley 1957. For general resources on the Agora, consult Thompson and Wycherley 1972, Camp 1992, Mauzy 2006, Camp and Mauzy 2009, Camp 2010, and Gawlinski 2014. On the lawcourts, see Boegehold 1995 and Townsend 1995, along with Lang 1990 on ostracism. For more on the numerous inscriptions of the Agora, see Bradeen 1973, Meritt and Traill 1974, Lalonde, Langdon, and Walbank 1991, Woodhead 1997, and Geagan 2011.

The study of Athenian, and Attic, epigraphy is old. The great collection of (most) Greek inscriptions is Inscriptiones Graecae, where volume I3 covers Attic inscriptions down to the year 403/2 bc, and IG II/III2 the years thereafter. This latter set is being republished: IG II/III3 1.2, 1.4, and 1.5 (laws and decrees 352/–322/1, 300/299–230/29, and 229/8–168/7 BC), IG II/III3 4.1 (public and choregic dedications), and IG II/III3 5 (Late Antiquity). IG publishes in Greek with commentary in Latin, and with no translations in the printed versions; I have therefore chosen as specific examples here mostly inscriptions that can be found in Rhodes and Osborne 2003 (RO) and Osborne and Rhodes 2017 (OR), which constitute rich collections, with English translations and commentaries, of specific inscriptions, many of them Athenian. For ease of accessibility, excellent translations and brief commentaries, and a rapidly growing body of inscriptions (added to quarterly), see Lambert’s www.atticinscriptionsonline.com. The other major source of Athenian inscriptions is the Agora series, of which Agora 18 (Inscriptions: The Dedicatory Monuments [2011]), Agora 19 (Inscriptions: Horoi, Poletai Records, Leases of Public Lands [1991]), Agora 21 (Graffiti and Dipinti [1976]), and Agora 25 (Ostraka [1990]) are cited here. This essay is also much indebted to Lambert forthcoming, an excellent overview of Athenian epigraphy with greater attention to some other sub-genres of Athenian inscriptions (mortgage-horoi, cavalry tickets, etc.) and to some technical details (history of epigraphy, dating, letter forms, onomastics and prosopography, the science of epigraphy) than there was room for here.

For Athenian epitaphs, there is no good overview, but for an argument addressing the great increase of Athenian epitaphs in the fourth century, see Meyer 1993. For inscribed Akropolis dedications from the Archaic period, Keesling 2003; for Akropolis ‘inventories’ (paradoseis, kathareseis, exetasmoi), Harris 1995. For inscriptions as honors to the gods, Meyer 2013, which also investigates earlier theories of democratic functionality, as well as significant placement on both Akropolis and in the Agora; for the latter, see also Shear 2011, and (especially) Lambert 2018, who lays out the bigger (more long-term) picture and cites the (few) factors that ‘drive’ the erection of inscriptions away from the Akropolis. For format as conveyer of knowledge, Meyer 2017. For honorific inscriptions as a significant element of Athenian foreign policy, Liddel 2010. On the relationship of literacy and democracy, Missiou 2011 is optimistic; of Athenian Empire to Akropolis inscribing, Moroo 2016.

For more on springs, rivers, and nymphs of Athens, see Ammermann 1996, Brewster 1997, Larson 2001, and Kypraiou 2004. On the water supply of Athens, consult Camp 1977 and Chiotis 2011. For more on wells and cisterns throughout the city, see Klingborg 2017 and Stroszeck 2017. Glaser 1983 and Longfellow 2011 (9–13) offer good overviews of Greek fountains and fountain-houses, along with Paga 2015 on the Southeast Fountain-House of the Agora. For more on Greek bathing, see Lucore and Trümper 2013. On fountains of Roman Athens, see Longfellow 2011 and Leigh 2018, with bibliography therein. See Christaki et al. 2017 for a discussion of Athenian water supply until the nineteenth century ad.

The most comprehensive account of Greek houses generally is Nevett 1999. On rescue excavations in Attika, see Parlama and Stampolidis 2000, Kaza-Papageorgiou 2016, and Eleftheratou 2019. For town planning, see Hoepfner and Schwandner 1986 and Shipley 2005. On gender in Greek houses, see Jameson 1990, Nevett 1994 and 1999, and Goldberg 1999. Tsakirgis 2005 is a good introduction to household industry near the Agora. For domestic religion, see Morgan 2007, and for saucer pyres specifically, see Rotroff 2013. On depictions of domestic life on Athenian vases, see Oakley 2020, 7–46. In the chora, see Nevett 2005 on ‘suburban’ houses and McHugh 2017 on farmsteads.

The study of Athenian cemeteries continues to be a vibrant field of study. For a recent overview of Athenian cemeteries in the Early Iron Age and Archaic periods, see Dimitriadou 2019. For the Classical cemeteries, see Morris 1992, Parlama and Stampolidis 2000, Marchiandi 2011, and Stroszeck 2017. For the study of cemetery management and the procurement of burial plots see Zelnick-Abramovitz 2015. For comprehensive collections of Classical tombstones, Clairmont 1993 and Bergemann 1997 and 2001 are good places to begin, but Conze’s multi-volume study (1893–1911) is still useful today. For tombstones that have been found more recently in rescue excavations, see Bardani and Papadopoulos 2006. For painted tombstones, see Posamentir 2006. For an overview of the public cemetery and the monuments associated with it, see Arrington 2010 and 2015.