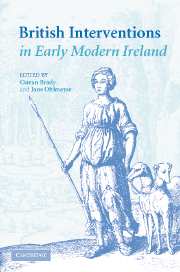 6 - The Bible and the bawn: an Ulster planter inventorised

The most enduring changes brought about in early seventeenth-century Ulster were the introduction of Protestantism and the decision to carry out a plantation there. In origin neither coincided exactly with the other, but they soon came to interlink. The final plan of plantation in 1610 produced on the whole a regional scheme for the allocation of the confiscated lay land in the six forfeited counties there – Cavan, Fermanagh, Donegal, Londonderry, Tyrone and Armagh – whereby, using the barony as a unit, English grantees were allocated to some areas, Scots to others, and those Irish who were restored, placed alongside servitors or former military men, to yet other areas. A crucial agent in the extension of the structures of Protestantism into much of Ulster was George Montgomery (d. 1621), who had already, in 1605, been appointed bishop of Derry, Raphoe and Clogher. A Lowland Scot who had obtained preferments in England both before and with the union of the crowns in 1603, and more an ecclesiastical administrator than one who had sought solely to organise a mission (now anyhow of uncertain success) to the Gaelic Irish, his achievement, from one perspective, was to establish the Church of Ireland in his northern dioceses on a sound economic basis. Having been appointed a commissioner for planning the plantation, he secured, before his own removal to the diocese of Meath, with which he was allowed to retain Clogher, in 1610, a significant endowment of lands for the episcopate within the plantation dioceses, some of which, albeit formerly of an ecclesiastical character, might otherwise have gone to lay settlers, as well as of glebe land for the parish clergy.