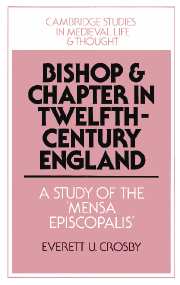 5 - The chapter as community

It was in a way paradoxical that as the episcopal church in the Anglo–Norman kingdom under the influence of the ideas of the reform movement began to distance itself in several respects from secular society, it came more firmly under the jurisdiction of the king and was obliged to assume more of the burdens of a worldly life. The inclination toward a celibate priesthood, free of simony and lay investiture, distinctive in dress and ritual, and selfgoverning in law, was countered by the treatment of bishops as barons, their property being subject to royal approval, and their legal competence determined by a royal court. In regard to the assets of individual churches and their allocation, the king's influence particularly was felt by his intervention sede vacante, and by the assessment of quotas for military service due from the tenants-in-chief, ecclesiastical as well as lay. On the last two points some further comment seems worthwhile.

As to the king's position during a vacancy, it has been shown that the exercise of regalian right was, by and large, a practice which took hold in the Anglo–Norman period. There appears to be no strong evidence that the Old English kings assumed they had the right to dispose of the revenues of vacant bishoprics or abbeys. The threat of appropriation by royal agents, therefore, was not an important factor in the allocation of estates before the Conquest. Under William I and his sons, however, the cathedral chapters were more and more obliged to take the possibility of a loss of revenue on that account into consideration, and the desirability of a division of assets between bishop and chapter was an issue with which they were increasingly concerned.