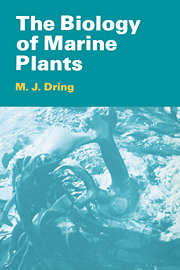 The basic data for studies of the geographical distribution of marine plants have been accumulating steadily — in the form of species lists for individual benthic sites and plankton samples — since the first seaweed was named. These data represent an enormous mass of information, and the first task of the phytogeographer is to ensure that the identifications and the nomenclature of different botanists, collecting throughout this time and in all parts of the world, are consistent. Only then can the overall patterns of distribution of the different species be described, and the interpretation of such patterns in terms of the ecological requirements of the plants or their evolutionary history begin. It is not surprising, perhaps, that the only world-wide analyses for whole groups of marine plants that have been completed refer to two of the smallest groups — the seagrasses and the marine wood-rotting fungi. This chapter describes some examples of the distribution patterns of both seaweeds and marine phytoplankton, and examines the types of problems raised by these distributions.

DISTRIBUTION OF INDIVIDUAL SPECIES OR GENERA

Large brown algae belonging to the Laminariales (kelps) and the Fucales (fucoids) are conspicuous and frequently dominant on rocky shores throughout the temperate regions of the world (see p. 121). Most of the individual species in these two groups, however, are less widely distributed, and many are restricted to a single coastline or ocean. Among the kelps, for example, Laminaria hyperborea is found only in N.W. Europe, Nereocystis luetkeana on the Pacific coast of North America, and Undaria pinnatifida on the shores of China and Japan (Fig. 7.1).