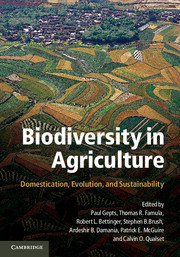 Biodiversity in Agriculture
Domestication, Evolution, and Sustainability
Buy print or eBook[Opens in a new window]

1 - The Local Origins of Domestication

Plant and animal domestication, which began by about 10,000 years ago, caused the biggest changes in human lifestyle in the past 2 million years. It resulted in the largest and most rapid increase in our population numbers, technology, and political and social complexity in our history. Its consequences were even larger than those of the mastery of fire or the development of writing. In this chapter, I discuss the paradox of why domestication nevertheless arose in only a few areas of the world, and I identify two still unsolved problems about why domestication began in the particular parts of the world where it did. Literature references will be found in the Further Readings section of my book Guns, Germs, and Steel (Diamond 2005).

There are three reasons for the big consequences resulting from domestication. First, in a wheat field or sheep pasture, all of the plants and animals are edible to us, but in natural habitats only a few of the plant and animal species are edible, so domestication meant much more edible food per unit area and the capacity to feed many more people per unit area. Hence farmer population densities are typically between 10 and 1,000 times those of hunter–gatherers. Second, domestication meant that people who formerly had to be nomadic to follow seasonal variations in food supply could now settle down in permanent villages next to their fields or pastures, so we became able to accumulate heavy nonportable technology like printing presses and atomic bombs, and (even before that) to shorten our birth intervals and pump out new babies faster. Finally, domestication produced food surpluses that could be stored to feed non-food-producing specialists, such as kings and bureaucrats, metal-workers and potters, and professional soldiers and scribes. For example, one American farmer today produces enough food to feed 125 nonfarmers, and even one Egyptian farmer in the times of the Pharaohs could feed five nonfarmers.