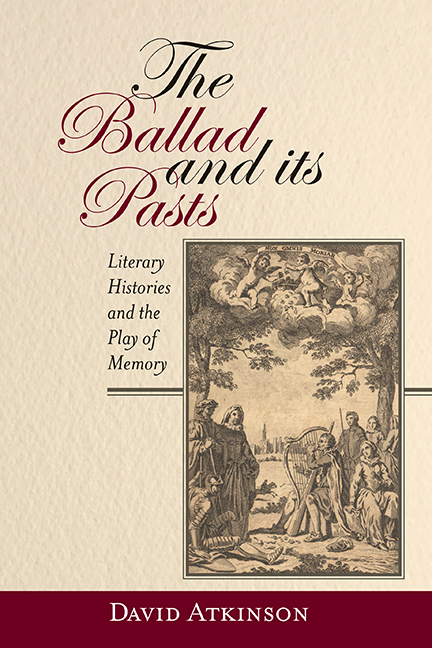 6 - Providence and the (Re-)Ordering of Reality: Murder Will Out?

CHAPTER 1 IDENTIFIED SOME of the problems with William St Clair's thesis that there was a ‘mass extinction of old ballads’ in the Romantic period. Crudely, there wasn't, but there was a shift in the style and subject matter of some of the ballads coming on to the market between, say, 1774 and the 1820s. More fundamental, though, is St Clair's casting of the matter in terms of a history of mentalities. On the one hand, the perpetuation of the old canon, for commercial reasons, is said to have kept the populace in ‘ancient ignorance’. On the other, the moment the 1774 watershed was reached and new publications entered the cheap end of the market, that same populace is depicted as having been only too ready to cast off the ‘old canon’. This is somewhat confusing, for it is not clear when, how, or why the posited shift in mentality took place: was it a consequence of the demise of the old canon, or was it already in place and waiting to bring about that demise the moment commercial conditions became favourable? Really, the conundrum illustrates the intrinsic difficulty of reading mentalities from imaginative literature.

Nevertheless, the charge of ‘ancient ignorance’ does have at least a superficial resonance with the idea of a resistance to modernity in ballads. The sub-genre of murder ballads is one that links early modern right through to Victorian balladry, even if such things as the format of the printed ballad did undergo a change during that period. Early modern murder ballads and related literature have been fruitfully used by historians in helping to chart a particular aspect of early modern mentality – that is, the reliance on, and the gradual decline in the reliance on, providence as a mechanism in the detection and punishment of crime, especially murder, in the absence of a functioning investigative police force and modern forensic techniques. The work of Alexandra Walsham and Malcolm Gaskill has explored in depth the mentalities of people who, it is pretty safe to assume, did not think quite like ourselves. So, it is worth investigating the persistence of some of those ways of thinking throughout the history of the ballads, even though, in line with the reservations already expressed, it is not going to be safe to read broader conclusions about mentalities directly from the ballad literature.