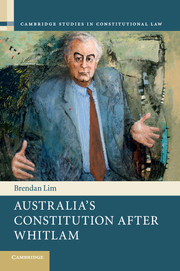 Murphy did not seem to regard Constitutional change through the referendum process seriously. He had great faith in legal activism and judicial interpretation to effect change. Gough Whitlam was one of the few parliamentary lawyers in sympathy with this manipulative approach.

All of this lay at the heart of the Whitlam government's higher lawmaking exercise. But Whitlam and Murphy did not agree on the basic constitutive question of how Australians could legitimately exercise popular sovereignty to enact new constitutional commitments. Specifically, Murphy rejected Whitlam's monist idea that normal periodic elections could confer constitutional authority upon the House of Representatives and the government that controlled it. For Murphy, other institutions had a legitimate claim to speak for the people. He took this position early on in his career. He was, after all, a senator.

When Murphy went to the Court, constitutional conservatives apprehended the Whitlam-Murphy alliance on centralism, socialism and individual rights. They apprehended the Whitlam-Murphy alliance on the validity of Labor's transformative legislation. They did not immediately apprehend Murphy's own dualist constitutionalism. It did not, however, take long for it to emerge. In idiosyncratic opinions, often dissenting ones, Murphy articulated a bold theory of popular sovereignty and a new role for the High Court in giving effect to that popular sovereignty.

This chapter is about popular sovereignty in the High Court and the competing conceptions of the Court's institutional role. Murphy's views remained peripheral in his lifetime (–1986). But under Chief Justice Mason (1987–1995) the Court embraced his principle of popular sovereignty. It used that principle to justify an expanded judicial lawmaking role and novel constitutional doctrines of implied rights. It claimed to speak for the people, mirroring the Senate's claims of the 1970s. Those claims did not, however, endure. In 1996, John Howard was elected Prime Minister. He remained in office until 2007. Howard, who had been Malcolm Fraser's Treasurer, was a conservative.