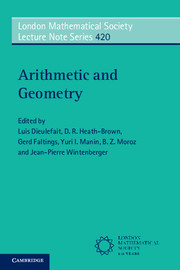 January 8, Jeanine Van Order, Iwasawa main conjectures forGL(2) via Howard's criterion (abstract). In this talk, I will present the Iwasawa main conjectures for Hilbert modular eigenforms of parallel weight two in dihedral or anticyclotomic extensions of CM fields. The first part will include an overview of known results, as well as some discussion of open problems and applications (e.g. to bounding Mordell-Weil ranks), and should be accessible to the non-specialist. The second part will describe the p-adic L-functions in more detail, as well as the non-vanishing criterion of Howard (and its implications for the main conjectures).

January 15, Oliver Lorscheid, A blueprinted view on F1-geometry (abstract). A blueprint is an algebraic structure that “interpolates” between multiplicative monoids and semirings. The associated scheme theory applies to several problems in F1-geometry: Tits's idea of Chevalley groups and buildings over F1, Euler characteristics as the number of F1-rational points, total positivity, K-theory, Arakelov compactifications of arithmetic curves; and it has multiple connections to other branches of algebraic geometry: Lambdaschemes (after Borger), log schemes (after Kato), relative schemes (after Toen and Vaquie), congruence schemes (after Berkovich and Deitmar), idempotent analysis, analytic spaces and tropical geometry. After a brief overview and an introduction to the basic definitions of this theory, we focus on the combinatorial aspects of blue schemes. In particular, we explain how to realize Jacques Tits's idea ofWeyl groups as Chevalley groups over F1 and Coxeter complexes as buildings over F1. The central concepts are the rank space of a blue scheme and the Tits category, which make the idea of “F1-rational points” rigorous.