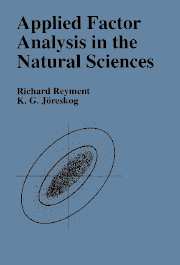 Factor analysis is a generic term that we use to describe a number of methods designed to analyze interrelationships within a set of variables or objects. Although the various techniques differ greatly in their objectives and in the mathematical model underlying them, they all have one feature in common, the construction of a few hypothetical variables (or objects), called factors, that are supposed to contain the essential information in a larger set of observed variables or objects. The factors are constructed in a way that reduces the overall complexity of the data by taking advantage of inherent interdependencies. As a result, a small number of factors will usually account for approximately the same amount of information as do the much larger set of original observations. Thus, factor analysis is, in this one sense, a multivariate method of data reduction.

Psychologists developed, and have made extensive use of, factor analysis in their studies of human mental ability. The method was primarily devised for analyzing the observed scores of many individuals on a large battery of psychological tests. Tests of aptitude and achievement were designed to measure various aspects of mental ability but it soon became apparent that they often displayed a great deal of correlation with each other. Factor analysis attempts to “explain” these correlations by an analysis, which, when carried out successfully, yields a small number of underlying factors, which contain all the essential information about the correlations among the tests. Interpretation of the factors has led to the theory of fundamental aspects of human ability.