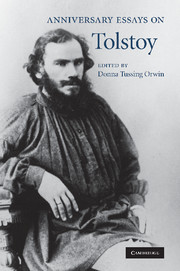 6 - The worm of doubt: Prince Andrei's death and Russian spiritual awakening of the 1860s

Where has he gone? There. Where? We don't know.

G. R. Derzhavin. “On the Death of Prince Meshchersky”

Hamlet. Not where he eats, but where he is eaten; a certain convocation of politic worms are e'en at him. Your worm is your only emperor for diet. We fat all creatures else to fat us, and we fat ourselves for maggots. Your fat king and your lean beggar is but variable service, two dishes, but to one table; that's the end.

After death there might be chemical life, instead of the [kind of] physical life we have now. In my Father's house are many mansions.

In his seminal study Tolstoy in the Sixties Boris Eikhenbaum demonstrates how the philosophical and aesthetic doctrines of War and Peace are indebted to the ideological environment of its time, particularly the debate over historical forces and the laws of history. In this chapter I connect the psychological (or more precisely, spiritualist) aspects of the novel and concurrent debates of the 1860s concerning the essence of the soul and its existence in the afterlife. These psychological dimensions of the novel are, in turn, intimately related to the historical.

The soul is the central concept of Tolstoyan psychologism, in which it is alive and active, possessing a remarkable depth while retaining the capability to reflect the sky. Mercurial and dynamic (a force), both free and subjected to necessity, it is simultaneously autonomous and conditioned by the reality that surrounds it.