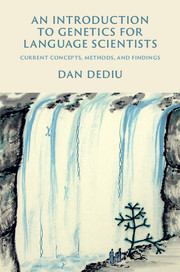 In order to properly appreciate the genetic bases of language and speech it is necessary to not only uncover the molecular and neuro-cognitive mechanisms involved, but to also shed light on the evolutionary pressures that have shaped them. This chapter introduces fundamental concepts of population and evolutionary genetics such as genetic drift, population structure and the various types of selection, and how we can infer their action from genetic data. These will provide the background for discussing the evolution of humans, the present-day genetic structure of our species and some cases where natural selection is (surprisingly for some) still shaping us.

What we have discussed so far about genes and their effects made relatively little reference to evolution and instead focused on the methods used to discover genes, the proximate molecular mechanisms through which they affect the observable phenotype, and their complex inter-relationships. However, as Dobzhansky (1973) famously argued more than 40 years go, “nothing in biology makes sense except in the light of evolution” and the genetic bases of speech and language are no exception. Quite the opposite, we need to understand the why questions behind the how's, such as: why are there so few genes in humans? Why are the interactions between genes so complex? And why are there differences in interactional complexity among genes?

The next sections will introduce the notions of evolutionary biology needed in order to understand questions relevant for the genetic bases of language and speech but will also briefly sketch, where feasible, the larger context into which these notions, methods and results fit. Therefore, it is not intended to be a general introduction to these topics as there are many excellent textbooks such as Halliburton (2004) and Jobling et al. (2013), nor does it cover all possible aspects or go into great depth, but instead tries to sample a selection of relevant topics, with an accent on recent developments that might help shed light on language evolution and change.