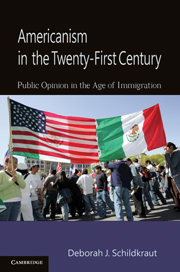 Recent debates about immigration reform have focused on many topics, including the economic impact of illegal immigration, language policy, national security, guest-worker programs, and earned citizenship. One other prominent concern has been the question of American identity. Immigrants and their supporters at rallies have been praised as showing native-born Americans what active citizenship – a key constitutive American norm – is all about (Meyerson 2006). But they have also been chastised for not “becoming American.” These charges were perhaps most vocal when a group of musicians released a Spanish interpretation of the national anthem. As one newspaper columnist wrote, it signaled “an invitation to separatism and a fractured national identity now finding voice among Mexican illegal immigrants and their advocates” (Farmer 2006). One editorial noted that “the mere fact that [the anthem] is in Spanish is a protest against assimilation.” Even President Bush, who was advocating immigrant-friendly reforms at the time, spoke out against the Spanish anthem. Critics also pointed to the presence of Mexican flags at immigration rallies in order to underscore their concerns. Some blamed activists or the federal government rather than immigrants. As one columnist wrote, “New immigrants are not expected to learn our history, master our common language, or even demonstrate loyalty and commitment to the United States” (Wilson 2006). Others, though, blamed immigrants. Recall Bob Lonsberry, the talk-radio host who argued to listeners that Latinos make choices that keep them oriented toward their ethnic identity and away from an American identity. Regardless of whether the instigator is the government or immigrants, the consequences allegedly hurt the nation as a whole, which will suffer if commitment and loyalty disappear. The goal of this chapter is to assess whether prioritizing a panethnic or national origin identity over an American identity promotes alienation from the American political community in the form of reduced trust and a diminished sense of obligation and patriotism.