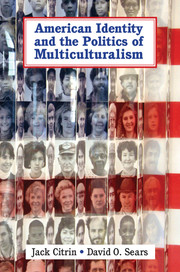 This book has both psychological and professional origins. On a personal level, what it means to have a national identity and how minority and majority groups coexist were daily questions for Jack Citrin as he grew up in a family of Russian Jewish refugees in China and Japan. Landing in the United States with a student visa in the mid-1960s, he moved from immigrant to citizen in 1978, feeling grateful to a country in which one could quite readily belong yet understanding that his skin color and unaccented English helped make this possible. The first Sears in what is now the United States shows up on the tax lists in Plymouth Colony in 1633, although little is known about him. In contrast, there are compelling family legends about David O. Sears’s maternal great-grandmother Anna O’Keefe who fled the Irish Potato Famine as a teenager in the 1840s and found work in the Lowell cotton mills. Among other things she provided his middle name. Later generations of Sears’s family progressed from farming to academia, yielding descendants with blessedly secure, classically “American” social identities. Perhaps a by-product of this security has been a deep concern about the treatment of minorities in a nation committed so early and so publicly to equality.

On a professional level, this book uses the important demographic changes in postwar American society to pursue our long-term research agendas. We regard ourselves as students of the psychology of politics, although one of us comes originally from the discipline of political science and the other from psychology. But throughout our careers and several earlier collaborations, our primary focus has always been on understanding the underpinnings and political consequences of public opinion. We also have shared an interest in symbolic politics theory as a conceptual starting point in analyzing public responses to societal changes and public events. Citrin has been a longtime student of American political culture, with a particular interest in political disaffection and system support and, more recently, in the future of national identity in a globalizing world. Sears has long done research on both sides of the American black–white racial divide, from black activism and political violence to white resistance to civil rights and racial equality.