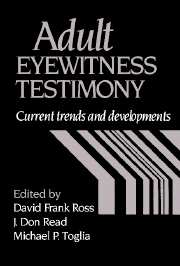 4 - Unconscious transference and lineup identification: Toward a memory blending approach

In 1983 Lenell Geter was given a life sentence for a series of armed robberies that he did not commit. After serving eighteen months in prison, he was released when new evidence revealed that another man committed the crimes. An investigation into the case showed that the prosecution's key witness had made a tragic error. The police had shown the witness a photo lineup shortly after the crime occurred. At that time the witness reported that the assailant was not present in the lineup. Several months later the same witness was shown another lineup. It contained five photographs, four new photographs, and one photograph that had been present in the first lineup. The witness selected the “old” or “familiar” photograph, and the person in the photograph was Lenell Geter. Apparently the witness did not remember having seen Geter's photograph in the first lineup, and as a result she incorrectly associated its familiarity with the crime, and made a false identification (Buckhout, 1984). In a similar case, a ticket agent in a railroad station was the victim of an armed robbery (Houts, 1963; Loftus, 1976; Read, Tollestrup, Hammersley, McFadzen, & Christensen, 1990). From a police lineup the ticket agent identified a sailor who had proof that he could not have been at the station at the time of the robbery. When questioned as to why he misidentified the sailor, the ticket agent claimed the sailor looked familiar to him. An investigation discovered that the sailor lived near the train station, and had purchased tickets from the agent at three different times prior to the robbery.