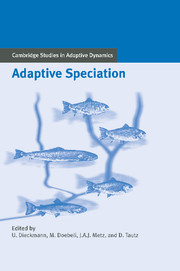 Adaptive Speciation
Buy print or eBook[Opens in a new window]

18 - Diversity and Speciation of Semionotid Fishes in Mesozoic Rift Lakes

Prolific speciation of fishes within lakes has long fascinated evolutionary biologists (e.g., Brooks 1950; Martens 1997), in part because of the difficulty in identifying extrinsic barriers to gene exchange that might permit allopatric speciation of vagile organisms such as fishes in lakes. The cichlid fishes of Lakes Victoria and Malawi (Fryer and Iles 1972; Greenwood 1981b) are the most celebrated examples of intralacustrine speciation, but its generality has been established by many other examples of endemic fishes, both extant (Kornfield and Carpenter 1984; Parenti 1984; Parker and Kornfield 1995; Strecker et al. 1996; Seegers et al. 1999) and fossil (McCune et al. 1984). Whether such intralacustrine speciation could be sympatric has engendered considerable debate (Worthington 1954; Kosswig 1963; Ribbink 1994; Turner 1994), despite previous theoretical arguments that the evolution of reproductive isolation is extremely unlikely without geographic separation (Tregenza and Butlin 1999). Empirical evidence that speciation in some of these fishes occurred in sympatry has been growing, however (Meyer et al. 1990; Schliewen et al. 1994; Johnson et al. 1996a; McCune and Lovejoy 1998), and recent theoretical results suggest that sympatric speciation is more plausible than previously believed (e.g., Dieckmann and Doebeli 1999; Kondrashov and Kondrashov 1999; Chapter 5). According to these latter theoretical studies, nonrandom mating and ecological interactions, like intraspecific competition for resources, can initiate sympatric speciation.

In this chapter, intralacustrine radiation of semionotid fishes during the Mesozoic is considered through a paleobiological perspective. While it is impossible to assess nonrandom mating in the fossil record, paleobiological studies do have the potential to illuminate pertinent aspects of ecology over a temporal scale impossible to study in extant organisms. First, some background on semionotid fishes and the ecological setting for their lives and preservation as fossils is given in Sections 18.2 and 18.3. In Section 18.4, parallel radiations of Semionotus in distinct lakes are described. These lacustrine radiations do, indeed, suggest an important role for ecology. Through detailed study of the history of a single lake (Section 18.5), it is shown that both intraspecific variation that subsequently became incorporated into new species and the first appearances of new species are concentrated in early lake history.