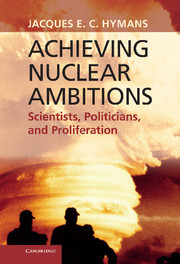 8 - Lessons for policymakers and directions for future research

I began this book by pointing out a surprising trend in nuclear proliferation around the world. During the early years of the nuclear age, dedicated nuclear weapons projects typically took just a handful of years, and certainly less than a decade, before bearing fruit. By contrast, the more recent projects have typically taken at least a decade, and often two or three. In addition, whereas the ultimate success rate of the early dedicated nuclear weapons projects was 100 percent, since 1970 the ultimate success rate has fallen to less than 50 percent. In short, with the passage of time, proliferant states have increasingly struggled to achieve their nuclear weapons ambitions.

Journalistic, policy, and academic writing on nuclear proliferation has ignored this good news story. Instead, the standard line is that today we are on the verge of a “second nuclear age,” with many developing countries ready to acquire the bomb in short order if they were to decide to do so. As one widely assigned undergraduate international relations textbook puts it: “It is not difficult to obtain the knowledge of how to construct nuclear weapons; all that is needed is the will and the nuclear material. Right now forty more countries possess enough enriched uranium and plutonium to quickly assemble nuclear weapons, and there is enough to make 100,000 nuclear weapons.” In the past, I myself have been guilty of similar, albeit less extreme, assumptions about states’ latent nuclear weapons capacity. In fact, however, the historical record suggests that these assumptions are seriously misguided.