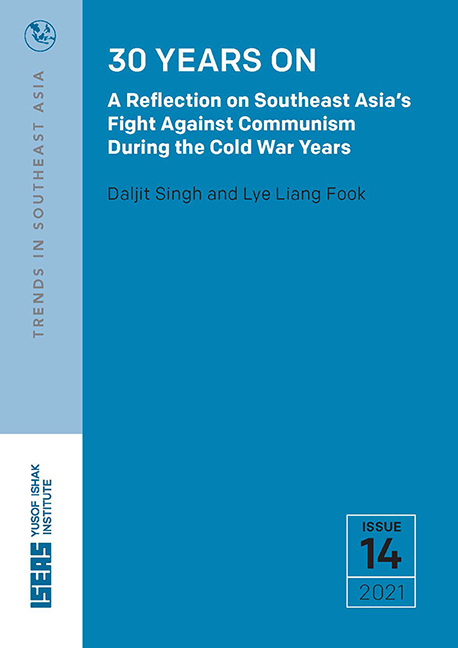 30 Years On: A Reflection on Southeast Asia’s Fight Against Communism During the Cold War Years

Communism was seen as a serious threat and a perennial concern in Malaya (Malaysia from 1963), Singapore, and elsewhere in Southeast Asia in the post-World War II period until the 1980s. Many people today, especially the younger generation, may not be aware of this. The communist parties of the Soviet Union and China had set up or abetted the setting up of communist parties in the developing world to foment communist takeover of these countries through political mobilization and violent revolution.

The years 1989 to 1991 saw the end of communist regimes in Eastern Europe and the Soviet Union, starting with the collapse of the Berlin Wall in 1989. In Southeast Asia, 1989 saw the signing of the peace agreements between the Communist Party of Malaya (CPM) and the governments of Malaysia and Thailand. The Cold War in Southeast Asia formally ended with the signing of the Paris peace accords in 1991 to settle the Cambodian conflict.

It is therefore appropriate at this juncture, thirty years after the end of the communist threat in Southeast Asia, to reflect on the security anxieties that communism then caused in Singapore and non-communist Southeast Asia.

The paper is divided into five parts. The first deals with the security threat posed by the CPM; the second with fears of a “nutcracker” strategy involving Indonesia and Vietnam, the two prongs of the nutcracker; the third on the impact on Southeast Asia of the capture of South Vietnam by communist forces in 1975; the fourth on the dangers posed to the region by Vietnam's invasion of Cambodia in 1978 and ASEAN's and Singapore's responses to it; and the last a concluding section on the close relations that Singapore enjoys today with Vietnam, Cambodia and China.

THE COMMUNIST PARTY OF MALAYA

The CPM insurgency in Malaya, which began in 1948, brought much insecurity for over a decade, marked by bombings, assassinations, ambushes, train derailments, fire-fights in the jungle, curfews and numerous security checks. The insurgency was defeated by British and Malayan military, police and intelligence forces and the Emergency (the euphemism by which the British called the insurgency) was declared over in 1960.