from Part I - Conceptual, Normative, and Empirical Issues 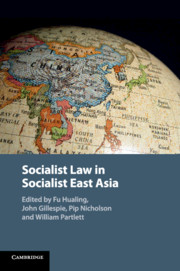 from Part I - Socialism and Legality

from Part II - Socialism and Legacies