from Part I - Changing Places

from Part I - Investigating variation in English: how do we know what we know? 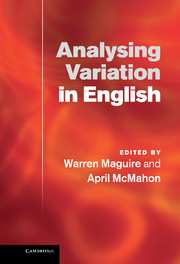