from Part I - Theoretical and Methodological Foundations

from Part III - Workplace Affect and Interpersonal and Team-Level Processes 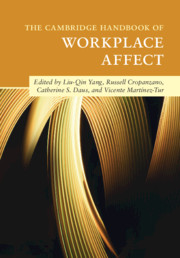