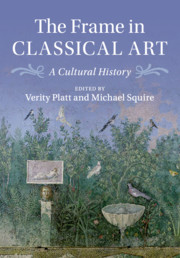 from Part IV - Framing the Sacred

from Part I - Framing the Frame

from Part V - Portraits of the artist