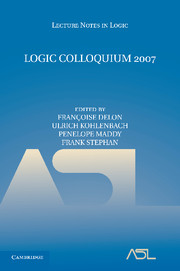 from PART I - PROOF THEORETIC ANALYSIS