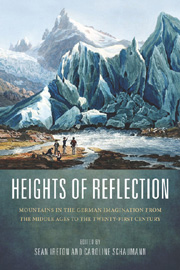 from Part II - Beckoning Heights: Summits Near and Far in the Nineteenth Century