from Part I - Historical Perspectives 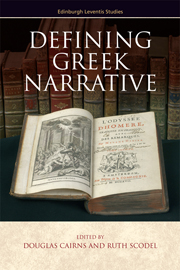 from PART I - DEFINING THE GREEK TRADITION