from Part VI - Technology in Statistics and Research Methods 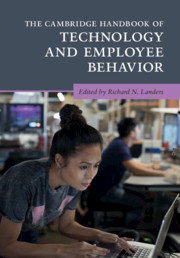 from Part I - Technology in I-O Psychology

from Part III - Technology in Training and Development