from Part IV - Teleology in Medicine

from Part I - Origins and Development 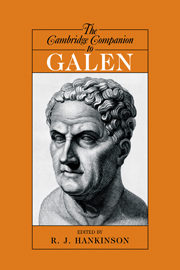 from I - Philosophy in the later Roman Empire