from Section 4 - Nutritional Support for Specific Conditions and Pathologies 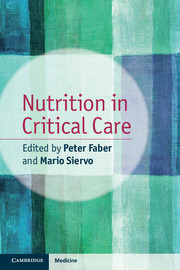 from Section 2 - Clinical aspects of complications